“I’ve always been a lover of stories. When I was a young kid, I was addicted to comics and TV (my favorite shows were Doctor Who, the Tomorrow People, and Star Trek), but I was too rambunctious to read books. And then, when I was about ten, my school set us “The WInd in the Willows,” by Kenneth Graeme. I resisted reading it until the very last weekend of the summer holidays, when my parents made me sit down and finish it. I remember tearing through it. When I finished I put it down and said “Why did I only read this now?” I’ve been an avid reader ever since.

I decided I wanted to be a writer in college. I took an amazing class at NYU on Hemingway and Faulkner from one of those teachers that love their topic so much, their enthusiasm makes you fall in love with it too. I took screenwriting as part of my degree in FIlm and Television and tinkered away at a few stories that I hoped would become novels, but my interest in the entertainment business waned. After ten years working in various behind-the-scenes jobs in the business, I changed careers and became a yoga and Alexander Technique teacher, and rediscovered my passion for writing, this time nonfiction about wellness and embodiment.

I’ve always been a massive nerd with a strong interest in the esoteric and the occult, and all things Sci Fi and Fantasy. It was that interest that led me back to writing fiction. My husband, who is even more of a nerd than I am, and I started attending Gen Con, the massive board gaming convention in Indianapolis, every summer. Gen Con has the most wonderful Writers’ Symposium connected to it. On our first trip to the con, between True Dungeon sessions and learning to knit, I tried a seminar by Michael A. Stackpole (21 Days to a Novel), and I was hooked. Now I can’t imagine not writing. I’m at my happiest when I’m working out a story or pounding out a draft.

In 2017, after several abandoned starts and one entire novel that I realized was book ten of a series and not book 1, I came up with a world and a story that I knew I wanted to pursue, and I wrote the first book in the Witch of Cheyne Heath series, “Waking the Witch.” It was exciting and scary, especially as I knew I wanted to self-publish, but two years and four books later, I had my first series completed and was ready to go!

When I’m not writing, you’ll find me knitting, reading, watching TV, playing board games with my husband, or online playing World of Warcraft.

I love hearing from readers, so if you see me at a convention, please say hello! Or you can send me an email at witold AT wvfitzsimon.com.” 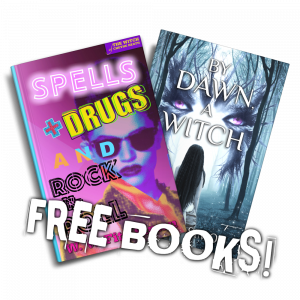 A deadly summoning ritual starts a war between celestial beings that echoes across the millennia.

A young woman must play the gods against each other to save herself and become a new kind of witch.

Sign up for my newsletter, Fitz-Simon’s Fabulous Fabulae, and get the short story, plus monthly news, sneak peaks behind the scenes, and be the first to know about special offers and new releases!